MSC Cruises goes in big on the U.S. market

MSC Cruises goes in big on the U.S. market 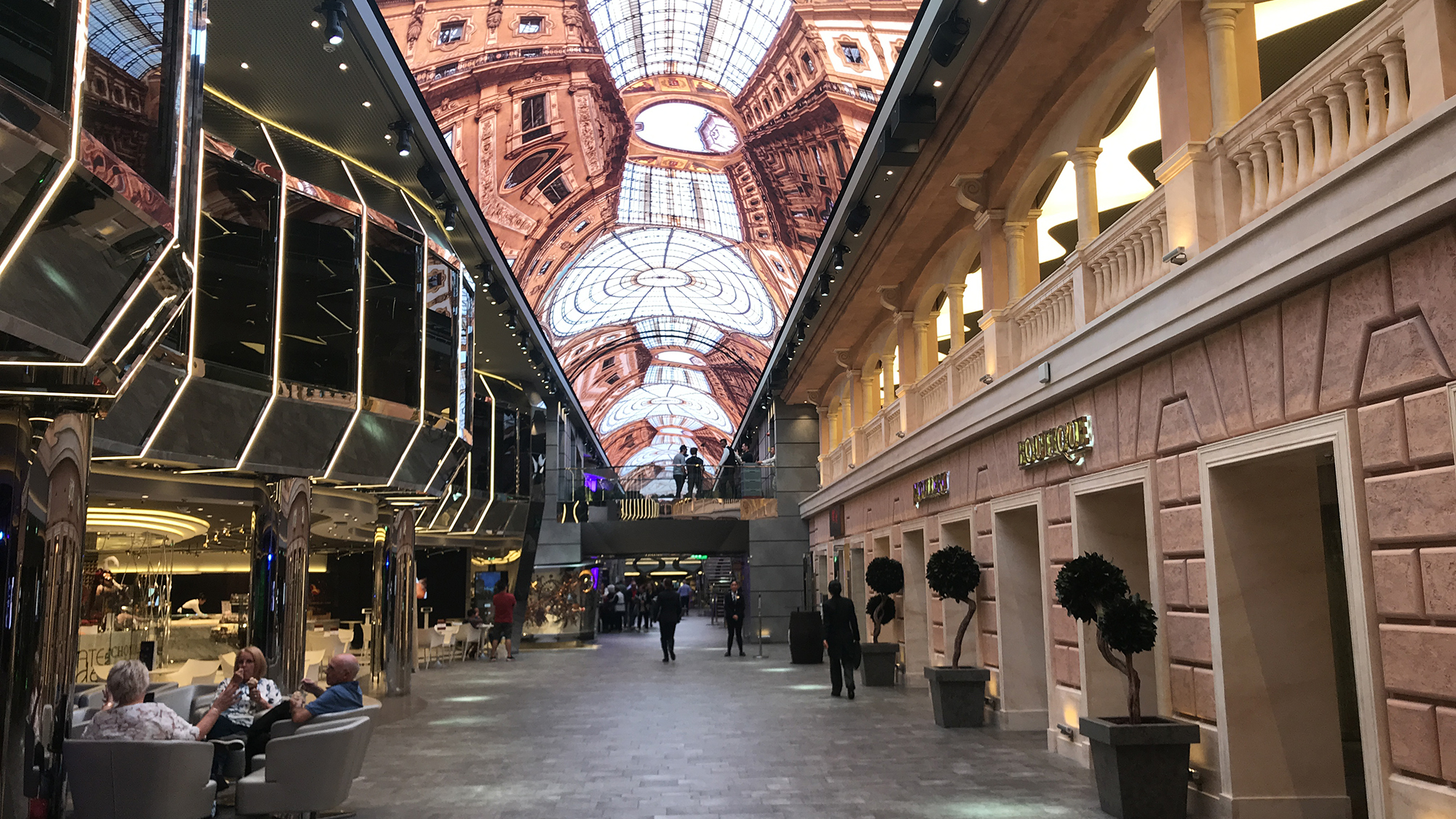 The MSC Meraviglia's promenade ceiling is alight with LED lights that change patterns and even put on a show. Photo Credit: Rebecca Tobin

NEW YORK -- The MSC Meraviglia arrived here on Monday from Europe, with MSC Cruises executives noting more than once that it is the largest cruise ship to dock in Manhattan.
The Meraviglia (pronounced Mer-a-VEE-lia) is sailing three cruises from New York, and then it will reposition to Miami for the winter season. The Meraviglia joins the MSC Seaside, the line's year-round ship in the Caribbean, and the MSC Divina and MSC Armonia this fall. For the first time, MSC has four ships serving the North American market simultaneously.
The Meraviglia, one of the largest ships in the fleet, carries 4,488-passengers at double occupancy and is 171,598 gross tons. In the U.S., only Royal Caribbean's Oasis-class ships are bigger. 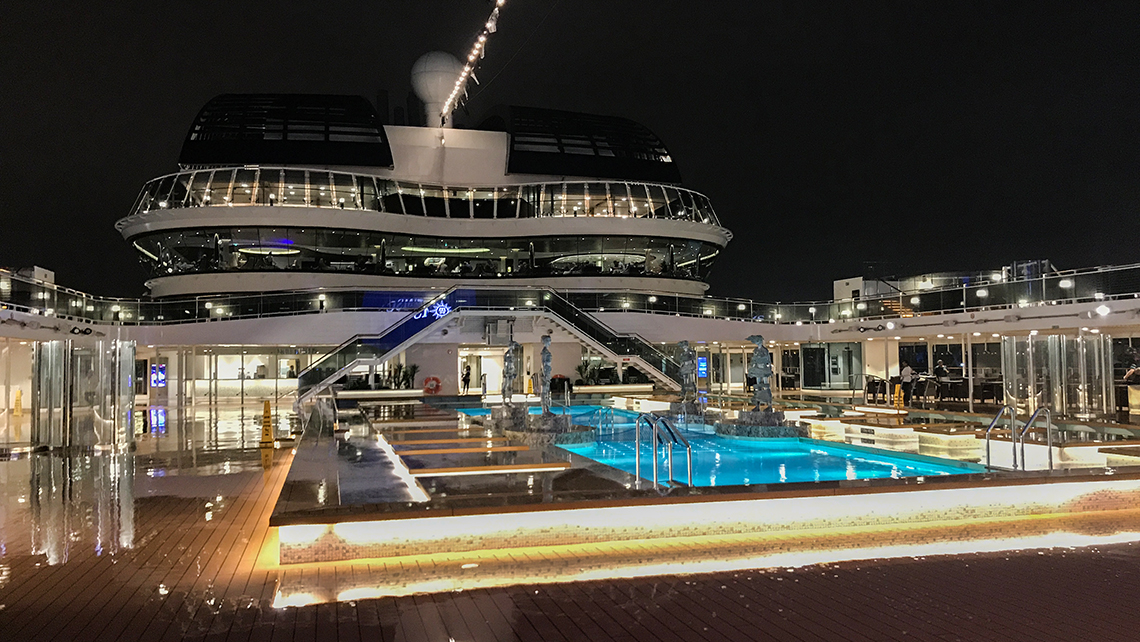 Night views: The MSC Meraviglia's pool deck. Photo Credit: Rebecca Tobin
"This is a perfect example of our commitment to growing in the North American market," COO Ken Muskat said in brief remarks Monday night. "We are the fastest-growing cruise line in the world. … We are growing in North America in a very big way."
Even so, he added, "We're very passionate about our European roots and our European style. You'll see that in the decor, you'll see that in the hardware, you'll see that in the culinary experiences, and you'll also see that in our entertainment."
The European flavour is on display the moment guests step into the center promenade. The ceiling is made up of thousands of LED lights that change into different patterns and put on an evening light show. On various visits to the promenade over the course of the evening, the ceiling changed from a pattern reminiscent of the Galleria Vittoria Emanuele in Milan to a cloud-filled sky to a homage to the Sistine Chapel.

The dramatic Swarovski crystal staircase on the MSC Meraviglia. Photo Credit: Rebecca Tobin
The vessel is massive with plentiful public spaces. There's a full-size, indoor basketball court. One big area with a swimming pool gives way to another big area with a swimming pool. When you get on the elevator and your guide says, "Press the button for Deck 16," it's not even the top deck; there are 19.
Although it is mega in size, the Meraviglia is broken down into smaller gathering spaces that make it seem positively intimate at times. Take the Carousel Lounge, which is purpose-built for MSC's exclusive Cirque du Soleil at Sea shows. It's a small theatre in the (almost) round, and guests are close enough to the performers to make eye contact. 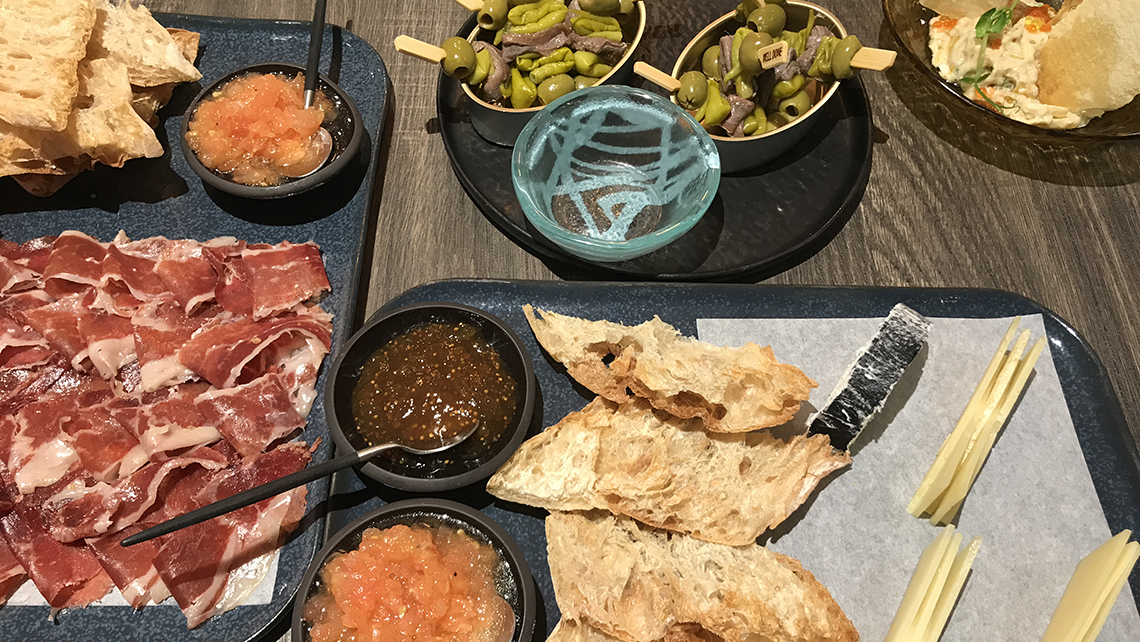 A selection of tapas at the Hola! restaurant. The restaurant features culinary creations by Michelin-starred chef Ramon Freixa. Photo Credit: Rebecca Tobin
The Meraviglia has no shortage of celebrity and brand partnerships. In addition to the Cirque du Soleil performances, a tapas restaurant features the dishes from Michelin-starred chef Ramon Freixa. The Chocolat and Cafe bear the name of pastry chef Jean-Philippe Maury. The kid's clubs are Lego designed. A partnership between MSC and Ramon Freixa includes curated shore excursions, gift packages and onboard holiday dinner menus.
Posted by Dave Jones at 12:20