By Donna Tunney
A handful of new entertainment options will debut on the Disney Fantasy, a 4,000-passenger ship under construction at Germany’s Meyer Werft shipyard.

Disney animation will expand into the ship's dining room with a new show called "Animation Magic," which "celebrates the magic of Disney animation and allows families to create and participate in a whole new way," Disney Cruise Line said.

The Disney Dream, which entered service in January, introduced the Animators’ Palate restaurant, where video screens on the wall come alive with characters from Disney’s various underwater worlds, which "swim" from screen to screen to talk to diners.

The ship will have a nighttime entertainment district exclusively for guests 18 and older, with "sophisticated bars and trendy lounges inspired by the very best in European travel."

Additionally, the Disney Fantasy will introduce new stage entertainment in its 1,340-seat theater with "Disney’s Aladdin — A Musical Spectacular." The Broadway-style production will feature the wise-cracking Genie and the cast from the classic animated Disney film "Aladdin."

The Disney Fantasy will operate week-long Caribbean cruises from Florida's Port Canaveral following its maiden voyage on March 31, 2012.
Posted by Dave Jones at 09:00 No comments:

Dispatch, QM2: View from the bridge

Travel Weekly's Donna Tunney is aboard the Queen Mary 2 for a transatlantic cruise. Her fifth dispatch follows. Click to read her first,second, third and fourth dispatches.You think you've got fuel-cost problems?

The Queen Mary 2 gets 29 feet to the gallon at full speed — about 39 mph. It’s one of the reasons why this 2,600-passenger ocean liner takes six days to cross the Atlantic — going slower saves some fuel, so the ship’s average speed is closer to 23 mph.

But the longer voyage also provides flexibility for the liner to maneuver away from bad weather when necessary, said Capt. Paul Wright.

During a tour of the bridge on the fourth day of our transatlantic sailing from New York, the amiable Wright described how the design of the ship is tailor-made for North Atlantic crossings.

"See the extended length of the bow," he said, pointing from one of the bridge windows. "You won't see that long bow on other ships. And this liner is deep — 10 meters of it is under the water, and with the reinforced steel hull, it sits much heavier in the water. This ship can battle through any kind of weather."

Fog and the potential for heavy weather are his biggest challenges, he said, but it's more a matter of "managing" the variables. 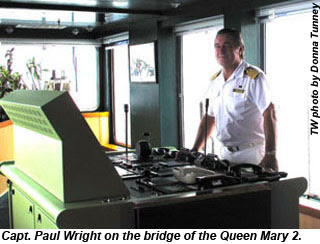 Some passengers, said the captain, like to encounter bad weather while sailing aboard the Queen Mary 2 while others worry about icebergs.

"With our radar these days, there’s no cause to worry about that," he said. "It's funny that some ships, like the ones that sail Alaska, go looking for ice and we do all we can to avoid it."

A map on the bridge shows the nearest iceberg locations — more than 300 miles north of the Queen Mary 2's course to Southampton.

Wright has been sailing the seas for a long time, serving on container and cargo ships, ferries and hovercraft before joining Cunard Line in 1980. He was named captain of the Queen Victoria when it entered service in 2007 and was assigned to the Queen Mary 2 last fall.

He lives in a "sleepy" Cornwall village in southwest England when he's not on the high seas.
Posted by Dave Jones at 16:45 No comments:

Cunard’s Queen Mary 2 pulled out of the cruise terminal in the late afternoon Tuesday under the first hint of blue sky that New York had seen in days. 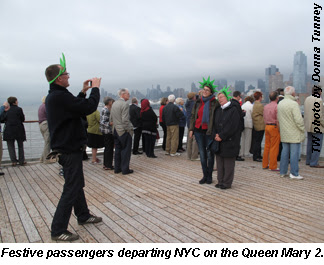 Twenty-six hundred passengers, the vast majority of them sporting British accents, began their seven-day voyage to Southampton, England. The onboard atmosphere was festive as Cunard’s flagship made its way past Ellis Island and the Statue of Liberty, and under the Verrazano-Narrows Bridge, but a tad reserved until the drinks started flowing on the outdoor decks. Folks started to loosen up.

An hour later, as the ocean liner made its way south, the sound of a howling wind broke the silence of empty corridors as passengers retreated to their staterooms to dress for dinner.

My dispatches from the Queen Mary 2 this week will showcase the ship’s design, amenities, activities, dining options and service.

Some questions come to mind.

What kind of traveler best fits this cruise product?

Is a transatlantic sailing still as glamorous as old movies make it out to be?

Who are my fellow passengers?

What is there to do all day?

The Queen Mary 2 entered service in 2004. It’s 1,132 feet long (imagine 41 double-decker London buses end to end) and 131 feet wide, and is 150,000 gross tons. Its whistle is audible for 10 miles, according to the Cunard fact sheet. Sounds impressive, but once we reach the open ocean, a 10-mile stretch is I guess what qualifies as a drop in the bucket.

There was, of course, an earlier Queen Mary, which was owned by Cunard-White Star Line and began sailing transatlantic cruises in 1936. Its final voyage came in 1967. After that it began a new life as a museum/hotel in Long Beach, Calif.

That ship’s fastest eastbound crossing was done in 1966, in four days and 10 hours. (The Queen Mary 2 moves more slowly these days to conserve fuel.)

So here I sit with my iPhone, iPad, Mac laptop, digital camera/video recorder and a slew of chargers and computer cords. It’s a computer bag full of electronic gizmos few could’ve imagined on the original Queen Mary back in the 1930s.

But my guess is that I’m not so different from the folks who sailed transatlantic cruises six decades ago. I’m keeping fingers crossed for calm seas, and I bet they did the same thing.
Posted by Dave Jones at 09:51 No comments:

Redone Grand Princess back in service

By Johanna Jainchill
The 2,600-passenger Grand Princess returned to service last week, after the most extensive drydock in Princess Cruises history, which saw the removal of the ship’s iconic Skywalkers Nightclub from its top deck.

Princess said in February that the removal of Skywalkers from the ship's 18th deck would significantly improve the fuel efficiency of the ship by reducing its weight.

The nightclub has given many Princess ships their distinctive profile since the debut of the Grand Princess in 1998.

In its place, Princess built a new nightclub on the top deck of the ship called One5, which will open May 21. 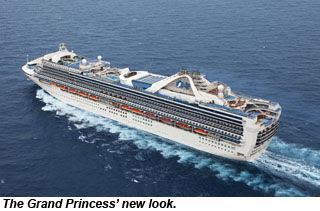 The first passengers on the refurbished ship set sail Friday from Fort Lauderdale after the ship's 24-day drydock that was documented with daily video updates that attracted more than a half million views.

Besides the removal of Skywalkers, the ship was given several features from the line's newest ships, such as the piazza-style atrium and Crown Grill steakhouse, as well as some spaces that are new to Princess: the Leaves tea lounge and library and the Alfredo's pizzeria.

The ship also has seven new suites, a remodeled casino, boutiques and an art gallery.

"This drydock has been a monumental effort, and we're very proud of the teamwork by everyone involved to create this sparkling 'new' ship ready to start a season of Europe sailings," Jan Swartz, Princess' executive vice president, said in a statement. "We know our passengers will appreciate the updated décor, fresh new feel, and especially all the wonderful added features."
Posted by Dave Jones at 09:36 No comments:

May 09, 2011 07:30
Political unrest in North Africa and the Middle East saw Thomas Cook’s winter half year operating losses deepen by £36 million to £166 million.
The disruption in programmes to Egypt and Tunisia cost £22 million while the later timing of Easter had an impact of around £15 million.
This came on revenue up by 4% to £3.431 million in the six months to March 31.
While Thomas Cook reported “strong” summer trading across Continental and Northern Europe, the UK was described as “facing a tougher trading environment”.
The group’s UK performance was £42 million down and “remains weak as we keep prices competitive to stimulate demand resulting in tighter margins”.
Thomas Cook admitted: “Cost savings of £16.5 million achieved in the UK were not enough to compensate for weak trading.
“We continue to review the UK business and are progressing with our plans to improve performance.”
The company added that the ongoing unrest in Libya and other countries in Middle East “is weighing on consumer demand” and recovery is slower than expected, despite the significant bed rate reductions.
“At this stage, we estimate that our programme to Egypt, Tunisia and Morocco for summer will operate at approximately 60% of the level originally planned, but this could change if the political situation does not improve,” Thomas Cook said.
“As a result we currently expect a further financial impact of around £35 million in the second half of the year.
“We continue to work on mitigating the financial impact through redirecting our flying programme and securing additional accommodation in alternative destinations.”
Summer trading in the UK “continues to be tough” with bookings flat year on year and margins lower as prices are cut to stimulate demand.
The programme is 63% booked, just 1% ahead over the time last year, with average selling prices up by 4%, reflecting changes in mix towards more all-inclusive product.
The size of group’s UK airline fleet is being revised due to difficult trading conditions in an effort to cut winter flying losses while “broadly maintaining” summer capacity.
The group’s UK defined benefit pension plans are being closed to all active members and pension provision will be through a defined contribution scheme.
A decision on the planned merger with The Co-operative Travel, being probed by the Competition Commission, is expected in August.

“We continue to cooperate with the Competition Commission regarding obtaining clearance for our merger with the Co-operative Travel,” Thomas Cook said.
The build-up of the group’s European Online Travel Agent (OTA) saw first half gross bookings rise by 10%, mainly driven from growth on the Continent while UK trading was described as “weak”.
Chief executive Manny Fontenla-Novoa said: “I am constantly impressed at how resilient our business and people are to ever changing business conditions.

“We have responded to the challenges of political unrest in MENA and the weak UK consumer environment by redirecting our flying programme, cutting costs and continue to focus on our strategic priorities.
"As expected, first half trading was impacted by the timing of Easter and the unrest in the MENA region but despite the difficult UK trading environment in the first half, we have contained the seasonal loss and kept our focus on cash flow.
“Our Continental and Northern European businesses have performed well, supported by an improving economic backdrop.
"Whilst results in our UK business are likely to be below last year's levels and the MENA situation remains uncertain, our Continental and Northern European businesses are performing well and summer booking levels are encouraging.  Therefore we remain well positioned to make progress for the year."
Posted by Dave Jones at 10:01 No comments: