Posted by Dave Jones at 11:05 No comments: Links to this post

Untitled Document
Posted by Dave Jones at 11:22 No comments: Links to this post

Independence of the Seas review

Hi we are back from our Annual Holiday. 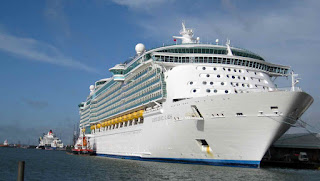 This year we cruised with Royal Caribbean's Independence of the Seas on a 10 night cruise to the Canary Islands.

I will publish my full thoughts soon

So keep looking
Posted by Dave Jones at 11:22 No comments: Links to this post

Oct 20, 2010 17:00
Another clutch of ocean-going cruise ships is due to enter service in 2011. Jane Archer gets the lowdown
Although the number of ocean-going ships set to come out of the shipyards next year is down on 2010 – the first sign that the recent building boom is ending – the talk in cruising is still of growth. 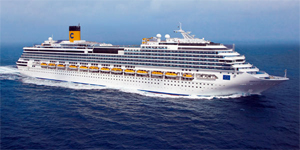 Association of Cruise Experts director Flo Powell says: “In tough economic times, people want to know what they are spending, which means cruising’s all-inclusive value proposition becomes even better.
“There will be fewer launches in 2011 but this year’s ship launches, new onboard activities and new destinations will have a snowball effect on next year’s bookings. The Passenger Shipping Association forecasts 6% growth to 1.75 million passengers.”
Next year’s eight new ocean-going ships include AIDAsol, which operates exclusively for the German-speaking market, leaving seven new ships for UK agents to sell.
On the rivers, Viking River Cruises is bringing out two vessels, to sail on the Danube and Yangtze; AMA Waterways is launching vessels on the Mekong and in Europe; Uniworld has new river cruise boats on the Rhine and Douro; and Avalon Waterways and Scenic Tours are each launching one new vessel in Europe.
In addition, the 700-passenger Royal Princess will be leaving the Princess Cruises’ fleet to join P&O Cruises after a gala renaming ceremony in Southampton in May.
Here’s a rundown of the seven new ships set to launch next year in the UK market in order of appearance.

Sets sail: January 22, 2011
Key selling points: The 1,258-passenger Marina is twice the size of the line’s three existing ships, which has made space for two more restaurants – Jacques for French cuisine, and Red Ginger for Asian. There’s a culinary studio for cookery lessons and La Reserve for wine-tastings.
Find it: Marina’s maiden voyage is a 13-day cruise from Barcelona to Miami. The ship cruises the US West Coast and Caribbean until March, then returns to the Mediterranean for the summer.
Sample price: From £2,633 cruise-only for a 10-day cruise from Barcelona to Civitavecchia, the port for Rome. oceaniacruises.co.uk

Sets sail: January 26, 2011
Key selling points: The AquaDuck, the first ‘water coaster’ at sea travels 765ft around the ship and has a four-deck drop; virtual portholes that give passengers in inside cabins a sea view; and the Enchanted Garden dining room, which changes from day to night as you eat.
Find it: Disney Dream will be sailing three, four and five-night Bahamian cruises year-round from Port Canaveral, calling at Nassau and Castaway Cay, Disney’s private island.
Sample price: From £463 cruise-only for a four-night Bahamian cruise on April 10, 2011.disneycruiseline.co.uk

Sets sail: May 1, 2011
Key selling points: Carnival’s first pub at sea, the RedFrog, which has its own signature beer, ThirstyFrog Red. There’s a new Italian restaurant, Cucina del Capitano, a ropes course with nets suspended 150ft above the sea, the drainpipe and twister water slides, and an outdoor weight-lifting area.
Find it: Carnival Magic is cruising the Mediterranean from Barcelona until November, when it relocates to Galveston, Texas, where it will be based year-round.
Sample price: From £899 for a seven-night cruise from Barcelona including flights and transfers.carnivalcruise.co.uk

Sets sail: April 27, 2011
Key selling points: More yacht than ship, it will have a chic grey and white hull and shades of brown inside. Cabins have open-plan bathrooms (with sliding doors if passengers want privacy) and several have interconnecting doors, so they can be put together to create a suite.
Find it: L’Austral will be based in the Mediterranean until October, when it relocates to Ushuaia, Argentina for cruises to Antarctica.
Sample price: From £1,655 cruise-only for a seven-night Adriatic cruise round trip from Venice on May 31, 2011. ponant.com

Sets sail: June 9, 2011
Key selling points: This is the third and last new 450-passenger ship being built by Seabourn, a sister to Odyssey and Sojourn, so it’s more of the same, rather than anything new. There’s Restaurant 2 for a taster menu, a stylish spa, balcony suites and caviar in the surf on calm days in the Caribbean.
Find it: Seabourn Quest will be based in the Mediterranean next summer, relocating to Fort Lauderdale in November. A 109-day maiden world cruise starts on January 5, 2012.
Sample price: From £5,449 for a 14-day cruise from Barcelona to Piraeus, the port for Athens, on June 20, 2011, including flights and transfers. seabourn.com

Sets sail: July 4, 2011
Key selling points: Favolosa is Italian for fairytale so Costa is promising decor resembling a modern-day enchanted castle. There will be Costa favourites including a Grand Prix driving simulator, 4D cinema and a large Samsara spa, plus a new Aqua Park.
Find it: Costa Favolosa (pictured top) will be based in Venice for the summer, sailing seven-day cruises to the Greek islands, Turkey and Croatia.
Sample price: From £769 for a seven-night Ancient Treasures cruise from Venice in July 2011 including flights and transfers. costacruises.co.uk

Sets sail: July 23, 2011
Key selling points: Silhouette is Celebrity’s fourth Solstice-class ship and will feature the same real grass lawn as its sister ships; a glassblowing workshop; Qsine for traditional dishes served in quirky ways; and Blu for healthy cuisine.
Find it: Celebrity Silhouette will be based in Civitavecchia, the port for Rome, for summer, sailing 12-night cruises to Egypt, Israel, Turkey and Greece. For winter 2011-12, it will be sailing Caribbean cruises from New Jersey.
Sample price: From £2,100 for a 12-night Holy Land cruise from Civitavecchia on August 10, 2011, including flights and transfers. celebritycruises.co.uk
Posted by Dave Jones at 11:12 No comments: Links to this post

By Travel Weekly Reporters |  Oct 27, 2010 09:15
Airport security checks have been labelled “redundant” by British Airways chairman Martin Broughton.
Many security measures should be scrapped, he told the annual conference of the Airport Operators Association in London.
Passengers are removing their shoes and having their laptops inspected due to pointless security checks at airports, according to Broughton.
There was no need to “kowtow to the Americans every time they wanted something done” to bolster security on flights bound for the US.
“America does not do internally a lot of the things they demand that we do,” he said. “We shouldn’t stand for that. We should say, 'we’ll only do things which we consider to be essential and that you Americans also consider essential’.”
Many of the checks, such as making passengers remove their footwear, are not required on internal US flights, Broughton pointed out.
“We all know there’s quite a number of elements in the security programme which are completely redundant and they should be sorted out,” said Broughton.
He claimed that differing attitudes towards technology made checks on laptops pointless.
“Take the iPad, they still haven’t decided if it is a laptop or it isn’t a laptop. So some airports think you should take it out and some think you shouldn’t,” Broughton said.
Heightened security was introduced after “shoe bomber” Richard Reid hid explosives in his shoes on a transatlantic flight in 2001.
Measures were increased following other threats. Liquids over 100ml were banned from flights after a plot in August 2006 which threatened to blow up a flight using liquid explosives.
The US heightened demands for extra passenger checks on flights after a Nigerian man tried to detonate a device hidden in his underwear on a flight to Detroit in last December.
Posted by Dave Jones at 15:21 No comments: Links to this post

Reports at the weekend suggested the United Nations is considering an international environmental £5 levy on all flights.
Posted by Dave Jones at 13:31 No comments: Links to this post

Deal of the Day Brilliance of the Seas

Email ThisBlogThis!Share to TwitterShare to FacebookShare to Pinterest
Posted by Dave Jones at 16:28 No comments: Links to this post 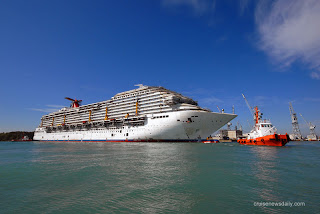 Posted by Dave Jones at 13:34 No comments: Links to this post

The arrival of a third new ship in the Cunard fleet is an opportunity to expand the brand beyond its traditional client base, travel agents at this week’s Queen Elizabeth launch said.
Ahead of Monday’s naming, Cunard managing director Peter Shanks spoke to Travel Weekly about the cruise line’s plans to counter perceptions of it being only a heritage brand now that it has the “world’s youngest fleet”.
“I am often quoted as saying that we are not a museum, because in the past Cunard has been seen only as a bit of a heritage brand: we are not,” Shanks said. “With Queen Elizabeth coming into the fleet, for the first time in our history it gives us a consistent offering to our guests and agent partners,” he said.

Phil Nuttall, director of the Cruise Village, said: “We have got our work cut out educating new, younger people about Cunard.
“There is now a requirement to do that, no doubt about it, now it has three considerable ships.”
Queen Elizabeth joins Queen Mary 2, launched in 2004, and Queen Victoria, which entered service in 2007, in the Cunard fleet. Nuttall said he expected Queen Elizabeth to attract traditional ‘Cunarders’ due to its many features harking back to the line’s history.
David Mills, Iglu Cruises head of commercial, said: “Cunard’s heritage is something that no other line in the world can touch.”
Posted by Dave Jones at 13:06 No comments: Links to this post